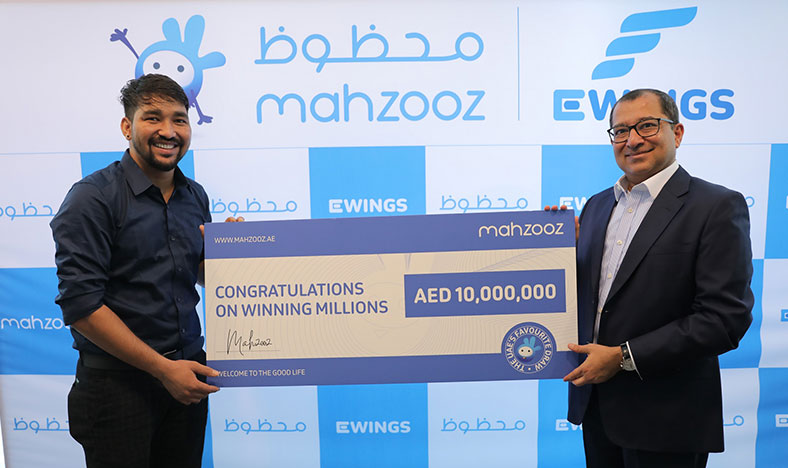 United Arab Emirates, Dubai, 21 September 2022: At the 94th weekly live Mahzooz draw, fortune drastically changed a 31-year-old Nepalese expat’s life as well as his title from that of a car washman to a multi-millionaire, overnight. With this latest win, Mahzooz, the UAE’s leading weekly draw that has given away more than AED 280,000,000 in prize money, would be celebrating its 28th millionaire, six of whom, were crowned this summer, between June and September.

“We have been seeing an unprecedent enthusiasm among the Nepalese community to regularly participate in Mahzooz in the hope of joining the league of winners. So far, over 3,200 lucky Nepalese participants have been among Mahzooz winners, 28 of which have scored the first and second prizes,” says Farid Samji, CEO of EWINGS, operator of Mahzooz at the press conference held to announce the latest winner.

Bharat, a Nepalese expat who has been working as a car washman at a private Dubai-based company scooped the top prize of AED 10,000,000 after matching five out of the five winning numbers which were 16, 27, 31, 37, 42. A father of two earning just about AED 1,300 a month and not even having a bank account to his name, now has the distinction of being the first Nepalese multi-millionaire to ever win such a massive prize, which is equivalent to over 345,000,000 Nepalese Rupees.

“The excitement is overwhelming. As I watched the live draw on Saturday night, I checked my numbers on the screen. It was impossible for me to sleep after that!” exclaims the family man.

Although he will receive an incredible amount of money, Bharat remains extremely humble, insisting that all he wants is to provide his family with a good life. “I am looking forward to paying off my mortgages and other bills as soon as possible”, he said. “It's important for me to set up the future of my two children aged 5 and 3 years old. This would be an incredible thing to be able to accomplish. This prize will enable me to achieve so much. It will change the lives of so many people!". Since Mahzooz started two years ago, Bharat has participated fervently without giving up hope that he would win one day.