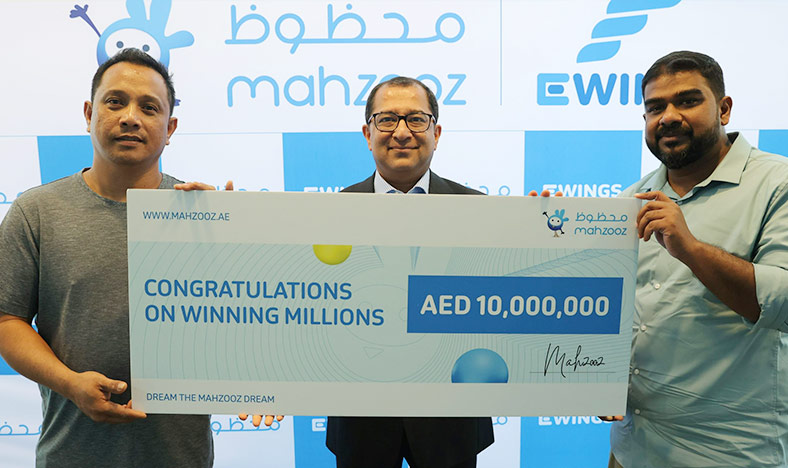 Shanavas from India and Nelson from the Philippines, are the two lucky participants whose lives have changed overnight, after matching five out of the five winning numbers, which were 7,9,17,19,21. With that, the total number of multi-millionaires that Mahzooz has created thus far is 27, 6 of which in 2022.

Speaking at the press conference held at EWINGS’ headquarters to introduce the two winners to the attending journalists, Farid Samji, CEO of EWINGS, operator of Mahzooz said: “Participants from India and the Philippines top the list of our players respectively. To date, over 50,000 participants from India have been among Mahzooz’s winners, with over 3000 of them scooping up the first and second prizes. As Filipinos form our second largest participants’ base, Mahzooz celebrated over 27,000 winners from the Philippines, with more than 1700 of them winning the two top prizes”.

Samji added: “Mahzooz is gaining popularity not only in the UAE, but all over the world. We are seeing an increased participation rate from the region month after month, and this is an indication of the trust the participants have in Mahzooz, thanks to its proven track record”.

Shanavas, 41, recounts his excitement when he received the call from EWINGS on Sunday morning to inform him of his big win as he had not realized untill then that he had won the top prize. “I remember choosing my numbers randomly without giving it much thought and then I went to work without noticing that my numbers were on the screen during the draw. My biggest surprise was to know that someone else had picked up the same numbers and now shares the top prize with me. I am happy for both of us” says the Indian father of two who has been living in the UAE for the past 14 years, away from him family.

Shanavas recalls with pleasure how he was unable to sleep for two days after learning the news. Since his friend introduced him to Mahzooz, Shanavas has been regularly participating in the draw for the past 18 months, but he never imagined that one day he would take home such a substantial amount of money. “I have not yet decided how to use my winnings but I know for sure that I will keep working in the UAE because this country has given me the ability to dream and now thanks to Mahzooz, these dreams can be fulfilled”, he concluded.

On Saturday night when the draw took place, Nelson, the second top prize winner who hails from the Philippines, was at work, when his friend told him that he had won the top prize. Hesitant to believe him, Nelson checked his Mahzooz account to verify it as he initially assumed his friend was playing a practical joke on him. “My family and I cannot believe it. This is the first time in my life that I win such a sizable sum of money” says Nelson with joy.

Nelson began participating in Mahzooz in June 2021, but he did not anticipate winning so soon. “It's impossible to predict when luck will strike. I am glad to have won with Mahzooz, and I want to use this money to build my dream home for my family back home”. Nelson, a dedicated professional, intends to continue working in the UAE and will remain loyal to his employer.

Participating in Mahzooz is as simple as registering via www.mahzooz.ae and purchasing a bottle of water for just AED 35. Each bottle gives participants one-line entry into the grand draw and another entry into the raffle draw, therefore doubling their chances of a win. The top prize of AED 10,000,000, second prize of AED 1,000,000 and third prize of AED 350 are up for grabs every week. Mahzooz also holds a weekly raffle draw where three guaranteed winners cash AED 100,000 each. The bottles that are purchased are channelled through Mahzooz’s community partners to hydrate those in need.