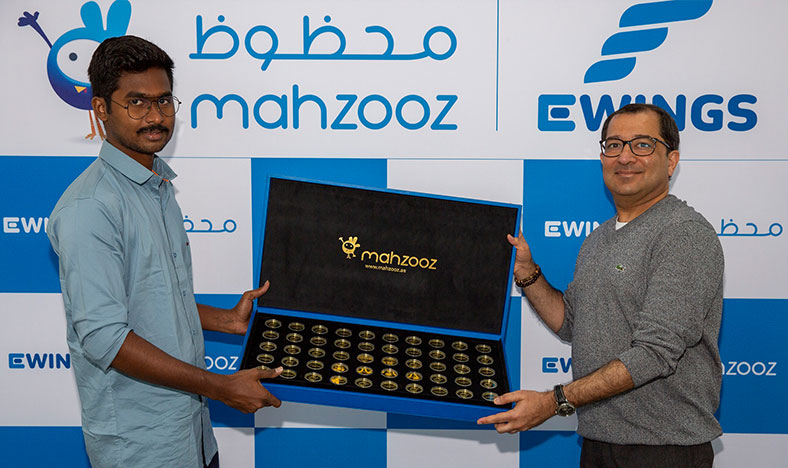 9 December 2021, Dubai, UAE: The fortunes of three lucky expats flourished after they won the Raffle Draw prize and took home AED 100,000 each in the 54th weekly live Mahzooz draw. However, it was 22-year-old Indian expat Akshay who struck gold in the special one-off Golden Draw held as part of Mahzooz’s UAE National Day celebrations and took home 1kg of gold.

The Dubai resident is elated and believes the prize is a blessing from his late father who died of cancer: “The draw happened on the same day as my father’s first death anniversary. My dad was my pillar of strength and life’s hard without him. I think he sent this prize my way to make my life easier and reduce the burden of my responsibilities.”

Akshay moved to Dubai two years ago to work as a driver at a gas agency and support his mother, brother, and sister-in-law back in India. “I’ve always dreamt of clearing my family’s debts. This gold will help me do that as well as build a house and buy my mother a gold chain,” he says.

The 54th weekly live Mahzooz draw also saw three Raffle Draw winners win AED 100,000 each. For Sharjah resident Imran, the prize money will allow him the independence he has always dreamed of: “This prize money is such a great boost to my savings. We live in a joint family household in India but now I can now buy an independent house for my wife and daughters. This win will also help me secure my daughters’ future education,” says the Indian sales project manager.

For Indian AC mechanic Riju and Filipino restaurant supervisor Maria, the prize money will give them the ability to retire early and enjoy their time with family and loved ones.

Riju, 46, says: “I’ve been in the UAE for 15 years and I’ve been planning to wrap things up here and settle down in India next March. This prize money came into my life at the most opportune moment to facilitate my move and allow me the freedom to set up a business I can live off.”

While Riju was in a barbershop in Dubai when he received texts from his friend informing of his win, Maria was at home in Abu Dhabi recovering from a surgery when a couple of friends texted her saying she had won. “When I checked my Mahzooz account and saw the winnings, I was so happy,” says the 48-year-old who has lived in the UAE for 23 years. “I’m going to go home to the Philippines for good in January, so, this prize money feels like an early Christmas gift as well as a great farewell gift from both Mahzooz and the UAE,”

“Now, instead of working in a restaurant, I will run my own in the Philippines. Mahzooz is proof that you can change your life for the better.” Maria adds.

Entrants can participate in the draw by registering via www.mahzooz.ae and purchasing a bottle of water for AED 35. Mahzooz is inclusive to all who are eligible.