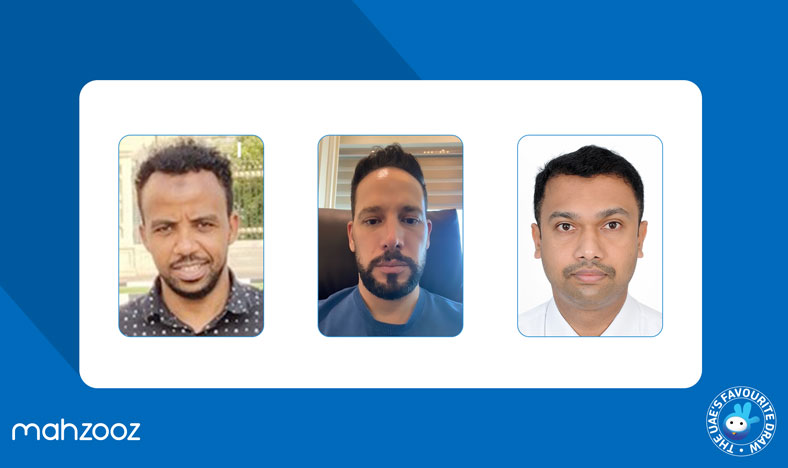 Ethiopian employee at a hypermarket chain, Ali, 32, has been a UAE resident for nine years and takes part in Mahzooz every week. On Saturday, Ali was at work when the draw occurred, when his colleague informed him, he had won. There is no doubt that Ali is ecstatic about his huge windfall, as this is the first prize he's ever received.

"I received a call from Mahzooz on Sunday telling me I had won," Ali said. The winnings will make a big difference in my life as I will be able to use them to invest in a business here in the UAE, and I am planning to gift my wife a new smart phone”.

An unexpected telephone call brought luck to 36-year-old Sreerag, an Indian jewellery store salesman. Sreerag has only taken part in Mahzooz five times, but now that he has won big, he plans to participate in the draw more often. “As I was attending a family gathering on Saturday, I was unable to watch the live draw. I was extremely surprised to receive a call from Mahzooz on Sunday morning telling me about my big win."

Sreerag has been living in the UAE for the past eight years, and he proudly admits that the UAE has helped him provide a better life for his family. Sreerag has not informed his family of his windfall yet, but he says he would most definitely like to use his big win to support his sister and travel with his family.

Mahmoud, an interior designer from Syria, received the phone call from Mahzooz on Sunday, which he claims has drastically changed his life. After participating in Mahzooz for about ten times, Mahmoud did not expect to be lucky the tenth time.

The 37-year-old is still deciding how to spend the prize money wisely, but he believes it will make a tangible difference in his life.

To participate in Mahzooz, all participants need to do is register at www.mahzooz.ae and purchase a bottle of water for AED 35. Participants are eligible for one-line entry into the Mahzooz grand draw for the top prize of AED 20,000,000 (for a limited period), the second prize of AED 1,000,000, or the third prize of AED 350 for each bottle purchased. They will also be automatically entered into the weekly raffle draw; in which three lucky winners will each receive AED 100,000. All they have to do is purchase one bottle of water for AED 35 and pick a set of five numbers.