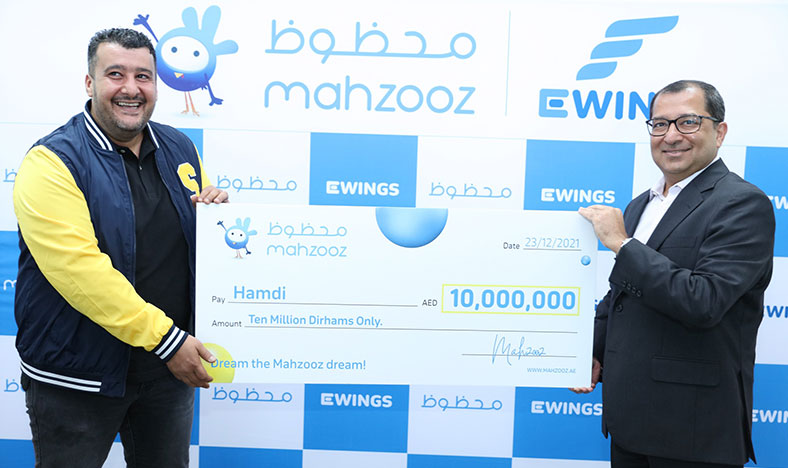 23 December 2021, Dubai, UAE: French-Tunisian national Hamdi scored the AED 10,000,000 Top Prize in the 56th weekly live Mahzooz Grand Draw. The lucky winner became a multimillionaire overnight after matching five out of the five winning numbers which were 8, 13, 21, 31 and 47. Those numbers made the 38-year-old TV producer Mahzooz’s 20th millionaire only because of a timely change of heart he had. “I stepped out of my house for some fresh air and I remembered I hadn’t participated in Mahzooz. I picked a few numbers without much thought and replaced 48 with 47 when I recollected 48 was one of previous week’s winning numbers,” explains the Abu Dhabi resident.

As the live draw that changed Hamdi’s life was unfolding, the die-hard football fan was engrossed watching a match and didn’t check the email notification announcing his colossal windfall until after the game. “I was disappointed and outraged as my team had lost. But when I opened the email and realised I had won AED 10,000,000, I was speechless. I had scored the winning goal of a lifetime! I closed and opened my Mahzooz app multiple times to confirm I actually won,” says the father of two about his initial disbelief.

Hamdi is still grappling with the enormity of his winnings and doesn’t have concrete plans but he’s surefooted most of it will go towards securing his sons’ future: “My boys aged five and one are my priority. Eventually, my wife and I will carefully draw up a plan to invest this money wisely. Fancy cars and houses aren’t my cup of tea,” Hamdi clarifies.

While AED 10,000,000 can buy him most luxuries, Hamdi reiterates it can’t buy out his passion for his profession. “You can give me all the money in the world, and I still wouldn’t quit my job. I love being a TV producer – it’s hard work and requires me to travel a lot but I enjoy this field. I’ll maybe use some of my winnings to finance special media projects.”

The self-confessed foodie says those projects might centre around food: “I love cooking, so I’ve always dreamed of launching a food channel on YouTube, or opening a small restaurant, or going on a culinary tour of the world and documenting it. I’m blessed that Mahzooz has given me the opportunity to fulfil my responsibilities to my family without having to sacrifice my personal goals. I will also spread my blessings by donating to charities and those in need.”

Hamdi likens life to football: “Life too is a beautiful game which is all about timing. When I came to the UAE nine years ago, I had 30 days to find a job and didn’t find anything until the 29th day when I had given up. Today the UAE is my home and I’m prosperous beyond imagination. I’m so grateful to this country and to Mahzooz.”

The 56th weekly live Mahzooz Grand Draw also saw 36 winners share the second prize of AED 1,000,000 and 1,282 winners bag the third prize of AED 350 each. Additionally, three winners took home AED 100,000 each in the Raffle Draw which features three guaranteed winners every week. Entrants can participate in the draw by registering via www.mahzooz.ae and purchasing a bottle of water for AED 35. Mahzooz is inclusive to all who are eligible.