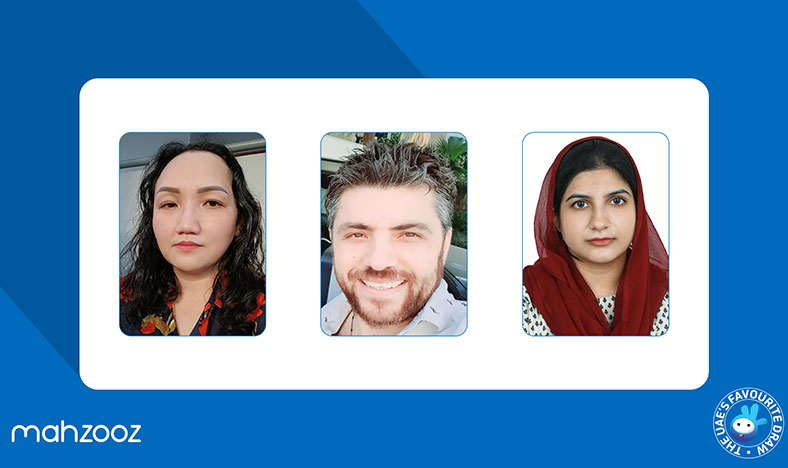 United Arab Emirates, Dubai, 13 October 2022: Mahzooz, the UAE’s leading and favourite weekly draw, welcomed new winners to the good life at its 97th draw on Saturday, October 8th, 2022. Mahzooz has so far produced 29 multi-millionaires in just two years, with 5 of them becoming millionaires this year.

Three participants from different countries—Lourans from Syria, Sehrish from Pakistan, and Carroll from the Philippines—were announced as raffle draw winners, taking home AED 100,000 each. These three people are eager to start living the good life thanks to their unexpected windfall from Mahzooz.

The 43-year-old Syrian chef and father of one, Lourans has spent the last 20 years living and working in Dubai. His memory of the delightful surprise from Saturday is still vivid. While he was out socializing with co-workers, his friend was trying to contact him to let him know that he had won. Lourans naturally froze when he received the wonderful news from his friend and initially believed it to be a dream because it was his first time winning anything, especially such a significant amount. He didn't realize he had won until he checked his Mahzooz account and saw his name and number appear.

Lourans regularly purchases one or more Mahzooz bottles of water whenever he can afford to do so. Still reeling from his enormous gain, Lourans is daydreaming about living in his own home and starting his own company in the UAE. The chef expressed his joy by saying, "I consider this to be a significant victory for me, and I want to convey my gratitude to Mahzooz for making my life simpler. As a result of this windfall, I will be able to finally settle down with my family here in the UAE". Lourans offers this advice to those who are still contemplating about participating in Mahzooz, "All my friends and colleagues have started participating in Mahzooz when they saw that I won with Mahzooz so all I would say is don't give up, keep participating, and never quit, you'll be a winner one day."

43-year-old Filipino expat Carrol was another chef who became one of the raffle draw winners on Saturday. Carrol, like Lourans, received a call from a friend on Saturday notifying her of her enormous windfall. She was overcome with happiness, but she had to restrain herself lest she wake up her sleeping roommates. The single mother, who has been working in the UAE for the past 12 years to support her 22-year-old son back in the Philippines, occasionally takes part in Mahzooz, so it was evident that she was surprised when her circumstances changed for the better overnight.

Carrol, who is still perplexed, says, "I would like to thank Mahzooz for improving my life. This money will help me build a home in the Philippines, pay off my debts, and save some money for my son." A humanitarian with a golden heart by nature, Carrol would like to donate some money to charitable causes back home too.

Sehrish, a 26-year-old Pakistani housewife, was out shopping on Saturday when the draw took place. She chose to check her Mahzooz account after she returned home. She was surely shocked to find AED 100,000 in her Mahzooz account. As she arrived in the UAE two months ago, Sehrish is called by her husband lucky charm, as it was her first time ever to participate in Mahzooz.

The delighted homemaker declares, "This is the first time I have won such a sizable amount and I would want to thank Mahzooz for giving me this lovely surprise” Sehirsh says she wants to use her fortune to complete her Ph.D doctoral degree in chemistry and save some money for the future of her new family.

Participating in Mahzooz is simple, all the entrants must do is register via www.mahzooz.ae and purchase a bottle of water for AED 35. For each bottle purchased, and thanks to the limited time offer, participants are now eligible for two-line entry into the Mahzooz grand draw for double the chances of winning the top prize of AED 10,000,000, the second prize of AED 1,000,000 or the third prize of AED 350. They will also be automatically entered into the weekly raffle draw where three lucky winners will be guaranteed to take home AED 100,000 each. All they have to do is purchase one bottle of water for AED 35 and pick two sets of 5 numbers.