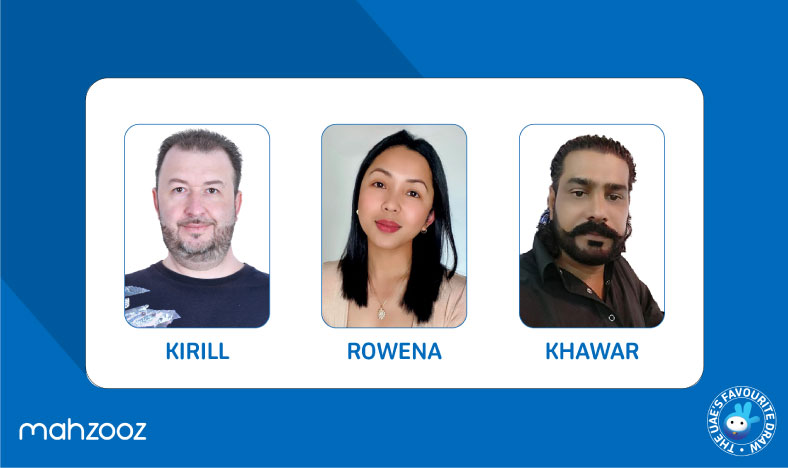 28 December 2022, Dubai, UAE: Mahzooz's 108th Super Saturday draws brought joy and happiness to many participants just in time for the festive season. 22 winners shared the second prize of 1,000,000, securing AED 45,454 each by matching four out of five numbers. Another 1,272 winners matched three out of five numbers and received AED 350 each.

Three raffle winners with ID numbers 26756175, 26797233, and 26730317 collectively won AED 300,000 in the guaranteed raffle prizes to make their festive season even more memorable. Kirill from Uzbekistan, Rowena from the Philippines, and Khawar from Pakistan were the lucky winners who took home AED 100,000 each. All three winners expressed their desire to accomplish notable milestones through their substantial windfall.

A 45-year-old Uzbek airline employee and food blogger, Kirill, has lived in Dubai for two decades and never imagined he would win such a large prize. Kirill was enjoying the company of his friends in the park when he received the email from Mahzooz. He couldn't believe his good fortune at first, but when his colleagues who also participate in Mahzooz began calling to congratulate him, he then realized that he had won.

Kirill and many of his friends believe that repeated and persistent participation is the way to winning. Kirill intends to use the money to buy a new car.

Rowena, a 36-year-old Filipina airport operations team leader, shares Kirill's excitement about her big win. Rowena, who has been living in the UAE for the past ten years, got the biggest surprise of her life on Christmas Eve when she got a call from a friend informing her that her name was announced during the draw. At around 10 p.m., Rowena checked the results on the website and was surprised to see her name among the winners. She started crying and couldn't sleep the entire night. She called her mother to inform her of her big win. Rowena is still coming to terms with her big win that she has not yet planned what to do with her windfall. She would most certainly like to donate a portion of her winnings to charity and save the rest for her future.

Khawar, a 36-year-old Pakistani expat, was watching the draw live on Saturday night when he saw his name on the screen. The expat who has arrived to Dubai 6 years ago works in a very physically demanding job, loading and offloading merchandize at a private company. He is overjoyed with his new win and believes the prize is a blessing that has arrived at the right time, as he plans to use it to start a clothing business in his home country and, of course, to buy himself a new smartphone. Khawar's friends have immediately created Mahzooz accounts and begun participating after being inspired by his latest win.

Entrants can participate in Mahzooz by registering via www.mahzooz.ae and purchasing a bottle of water for AED 35, which enables them to enter multiple draws, the Fantastic Friday Epic Draw and the Super Saturday Draws, by choosing two different set of numbers. The Super Saturday Draws require participants to pick 5 out of 49 numbers for a chance to win the top prize of AED 10,000,000, the second prize of AED 1,000,000, or the third prize of AED 350. Participants will also be automatically entered into the raffle draw in which three guaranteed winners will each receive AED 100,000. The new Fantastic Friday Epic Draw requires participants to choose 6 numbers out of 39 for a chance to win AED 10,000,000.

Mahzooz means ‘lucky’ in Arabic and is the UAE’s favourite draw that offers participants a life-changing opportunity to win millions every week. Mahzooz is dedicated to making people’s dreams come true and giving back to the community.