Charity on the cards for three Mahzooz raffle winners 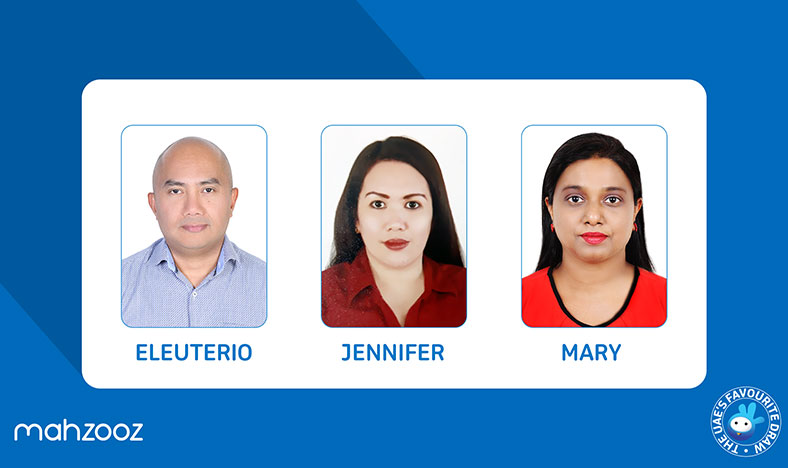 Mahzooz had announced earlier this week the launch of Fantastic Friday Epic Draw, a new draw that participants can enter at no additional cost yet stand a chance of winning an additional AED 10,000,000 by choosing a new set of favourite numbers.

Thanks to Mahzooz’s Super Saturday raffle draw, Jennifer, a 44-year-old Filipino expat who works as a call center executive for a bank in the UAE, will now have the chance to ensure the financial future of her family back in the Philippines, as she is one of the three raffle prize winners. Jennifer plans to give back to the community in addition to making sensible investments in her home town. "I never feel like I'm wasting money because the AED35 I pay to purchase a bottle of Mahzooz water goes to a worthwhile cause. Mahzooz has helped me today just as much as I like helping others". She encourages others to participate in Mahzooz, saying, "This money would help me continue my philanthropic activities”.

Mahzooz's second raffle draw winner, Mary, is an Indian expat who shares Jennifer's altruistic nature, and participates consistently in Mahzooz to give back to charity. A 43-year-old accountant who has lived in the UAE from the age of 13 has participated in Mahzooz only 10 times. Nevertheless, she was lucky the 10th time around. Mary will set aside a portion of her prize money for her daughter's higher education, and she would be giving some to charity. She wants to treat her friends to a special meal to celebrate her victory.

The 40-year-old Filipino expat Eleuterio, who was out grocery shopping with his wife at the time of the Super Saturday draws, learned of his win from friends. Eleuterio, a manufacturing engineer by trade, has been taking part in Mahzooz every week, so when he learned that he had won AED 100,000 in the raffle draw, he was undoubtedly taken aback. Eleuterio had previously won smaller prizes but this was his first time winning a cash award. Eleuterio plans to invest his prize money at home and contribute some of it to charity, just like the other two winners.

To join Mahzooz, all participants need to do is register at www.mahzooz.ae and purchase a bottle of water for AED 35, which enables them to enter multiple draws, the Fantastic Friday Epic Draw and the Super Saturday draws, by choosing two different set of numbers. The Super Saturday Grand Draw requires participants to pick 5 out of 49 numbers for a chance to win the top prize of AED 10,000,000, the second prize of AED 1,000,000, or the third prize of AED 350. Participants will also be automatically entered into the Super Saturday Raffle Draw in which three guaranteed winners will each receive AED 100,000. The new Fantastic Friday Epic Draw requires participants to choose only 6 numbers out of 39 for a chance to win AED 10,000,000.

Mahzooz is committed to changing people’s destiny by ushering them into the good life.