Three expats are now AED 100,000 richer each thanks to Mahzooz’s 101st weekly draw 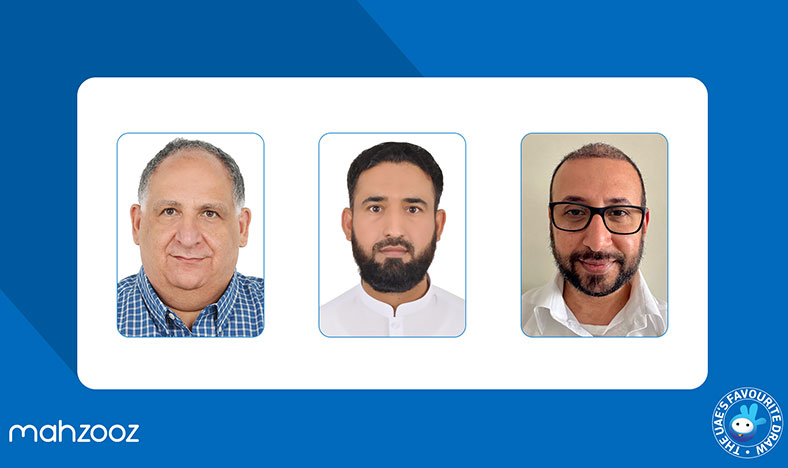 United Arab Emirates, 9 November 2022: Three lucky winners were left speechless after winning AED 100,000 each in the 101st Mahzooz weekly draw. The expats - Anas from the UK, Muhammad from Pakistan, and Qadeer from India - won the weekly raffle draw that took place on Saturday 5th November at the Mahzooz studios.

Anas, a 56-year-old IT professional from the UK, has been living in the UAE for three years. The passionate equestrian describes his first reaction to discovering the moment he had won: "I did not believe it at first. I received an email notification from Mahzooz that I had won while I was out. Immediately, I checked my Mahzooz account, and I was absolutely thrilled. I was speechless with joy when I discovered I had won.”

Anas appreciates that the money came at a good time given the increasing cost of living, so he will make appropriate use of it. He would like to buy his wife a present and get a new car for himself with his win. An elated Anas says, “Participate and have fun. Learn to relax and keep your calm. One needs to take chances to be able to win”.

Muhammad, a 35-year-old tailor from Pakistan who has been living in the UAE for eight years, is overjoyed that his AED 100,000 prize will improve his life, especially for someone from a middle-class family like him. "I will use some of the money for my driving lessons because I will have more employment prospects after I get my driving license," he said.

Muhammad didn't find out he had won until his friends told him when he was preparing dinner on Saturday. Although he is still processing the news he will undoubtedly want to treat himself by purchasing the latest smartphone. “Because of my victory, more of my friends and family are inspired to take part in Mahzooz” he concluded.

40-year-old Indian expat Qadeer believes that his Mahzooz raffle draw victory has been, quite literally, the answer to his prayers. Working as a sales representative for a stationary store in Dubai, Qadeer has lived in the UAE for almost three decades. Qadeer is a regular participant of Mahzooz, having been a loyal customer since the beginning of the draw. As Qadeer was just returning from his nighttime walk, his sister, who also participates in Mahzooz frequently, informed him of his tremendous win.

The selfless expat is altruistic about his win and shares his commitment to pay it forward by donating a part of his win to charity after indulging in a smartphone.

To join Mahzooz, all participants need to do is register at www.mahzooz.ae and purchase a bottle of water for AED 35. Participants are eligible for one-line entry into the Mahzooz grand draw for a chance of winning the top prize of AED 20,000,000 (for a limited period), the second prize of AED 1,000,000, or the third prize of AED 350 for each bottle purchased. They will also be automatically entered into the weekly raffle draw in which three guaranteed winners will each receive AED 100,000.