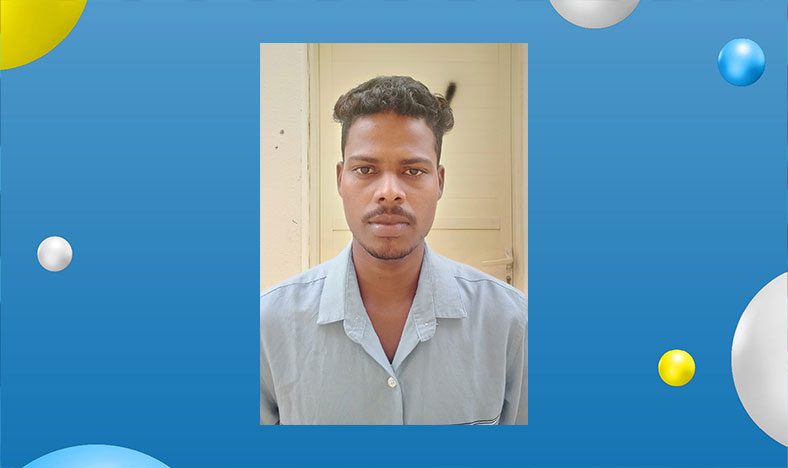 30 December 2021, Dubai, UAE: For years, Indian farmer-turned-mason Thinakar hoped that the land he and his parents farmed on would yield a bumper crop and change their lives. But it was in the 57th weekly live Mahzooz Grand Draw that the 25-year-old skilled labourer from Fujairah reaped a bounty of AED 10,000,000 Top Prize. The first-time participant became Mahzooz’s 21st millionaire after matching five out of the five winning numbers which were 1, 33, 40, 45 and 46.

While Thinakar’s friends believe it was a case of beginner’s luck, he insists it’s his late grandparents’ blessings that have yielded him the wealth of a lifetime at his very first attempt with Mahzooz. “I’ve seen my roommates participate for months and thought it was time I did too. I was very nervous as it was my first time participating, so I selected the numbers randomly. My late grandparents’ blessings have brought me this money as the lifeline to save my family.”

Rescuing his family from a deluge of debts was the primary reason Thinakar moved to the UAE two years ago on the money he borrowed from friends. “The farmland we bought with a loan was costing us more than the income the harvest generated. I’ve worked very hard to bring our liabilities down to AED 50,000,” says the caring son.

Thinakar’s massive windfall with Mahzooz has dwarfed his gigantic problems so much so that he has decided to reunite with his family and asked his eldest sibling working in Saudi to move home to jointly run a business and cultivate their land. “The largest sum of money I’ve seen is AED 900. Only because of wonderful Mahzooz I now have 10,000 times that amount. So why should my family struggle?”, says the youngest of three brothers.

Since he found out about his lucky break while watching the weekly live draw show on YouTube, Thinakar admits he has been restless. “I didn’t sleep that first night, and I’ve lost my appetite since the results. I’m so happy as I’ve accomplished my dream of reaching great heights but having money of this magnitude at such a young age is a huge responsibility.”

He plans to shoulder that responsibility maturely by improving the school facilities in his village: “I was never a studious person, but I know that good education can open windows of opportunities. I was able to come to the UAE only because I finished 12th grade and completed a vocational course.

“Now because of that decision, I’m a multimillionaire who can finally buy the Yamaha RX100 bike I dreamed of as a teenager! I can’t thank the UAE and Mahzooz enough.”

The true-blue farmer believes that what you sow is what you shall reap. It’s an extension of his motto in life, inspired by a dialogue, his favourite Indian actor Vijay said: “‘Life is a circle – winners can become losers and losers can become winners. I’m a winner today because I have been kind to people in the past and I will continue being generous. A change in bank balance won’t alter my humility,” concludes Thinakar. The 57th weekly live Mahzooz Grand Draw also saw 6 winners share the second prize of AED 1,000,000 taking home AED 166,666 each. Additionally, three participants won AED 100,000 each in the Raffle Draw.

Entrants can participate in the draw by registering via www.mahzooz.ae and purchasing a bottle of water for AED 35. The next weekly live draw will be held on January 1 2022 at 9:00pm UAE time. Mahzooz is inclusive to all who are eligible.